Today the firm allowed us to dress casual for the holiday and leave a little early. 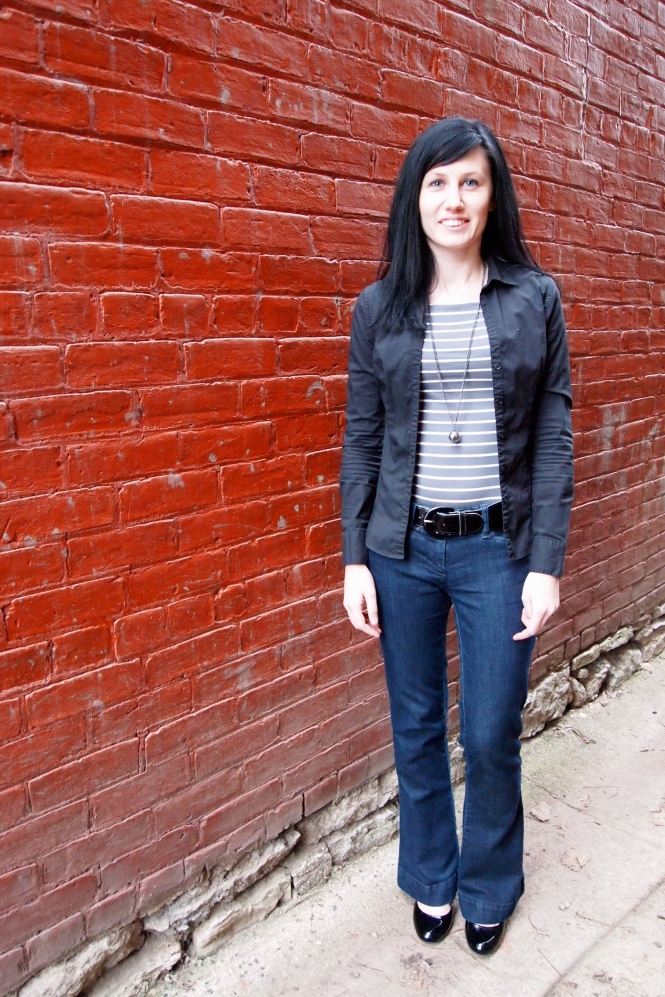 I really like this shirt. The only downside is it has 3/4 length sleeves so I have to wear the button-up shirt over it for work.

After work I headed to the store and picked up some New Year’s Eve essentials for the night. 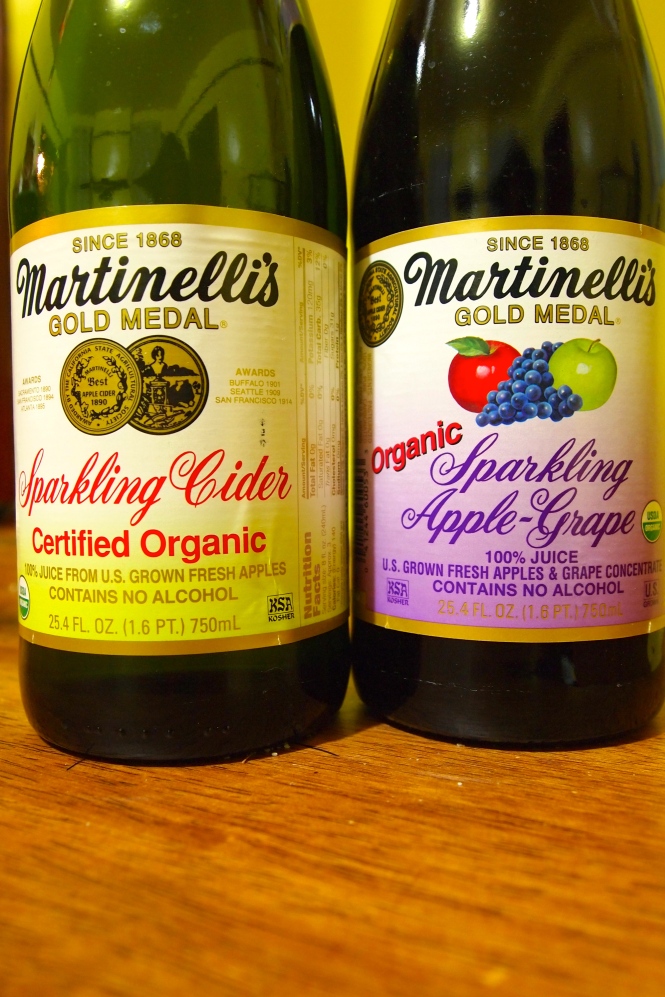 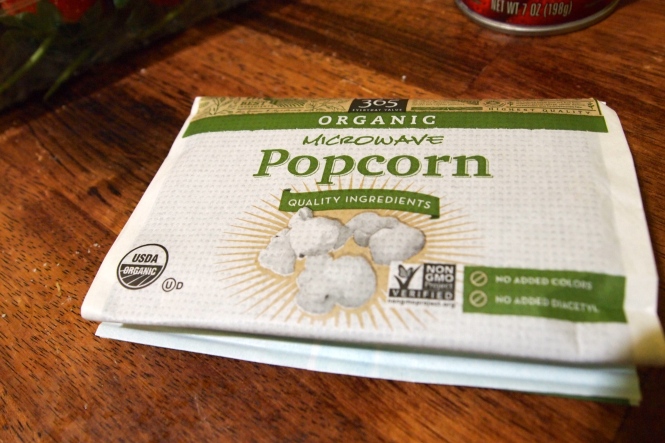 Popcorn to be popped for me.

Strawberries washed and ready to cut

Movie ready to go on Netflix.

Ben has to work so it’s just the kids with me tonight as they try to stay up until midnight.  My predictions are Isabella asleep by 10:30, Blackburn is sleeping right now and I think he may stay asleep, and Vita may not go to bed at all.  Wishing you all a safe and fun-filled night!

Adding to my growing owl collection: 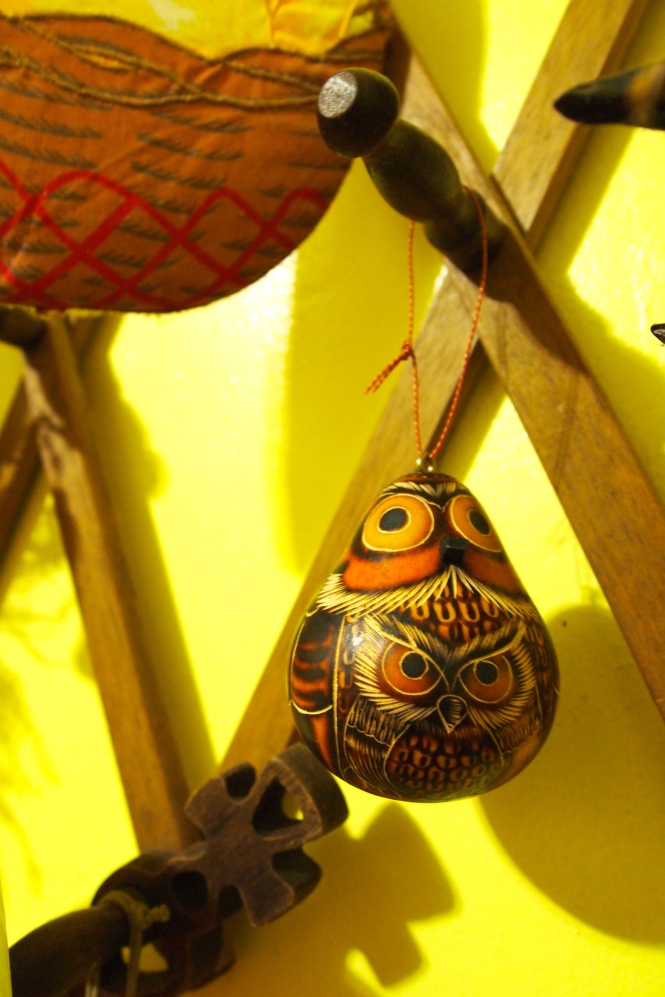 These three ornaments are from Ben’s mom and are hanging in our dining room.

On Christmas Eve my mom gave me the top owl and she also gave Isabella her very first owl stuffed animal.

Yesterday we got a decent amount of snow and we headed out to play.  First in the backyard and then we walked to the park: 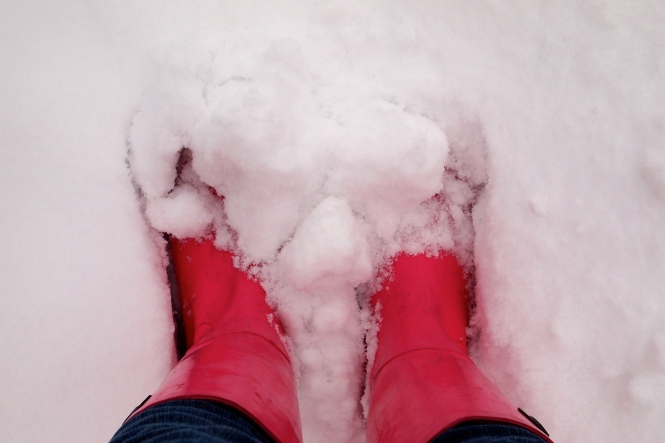 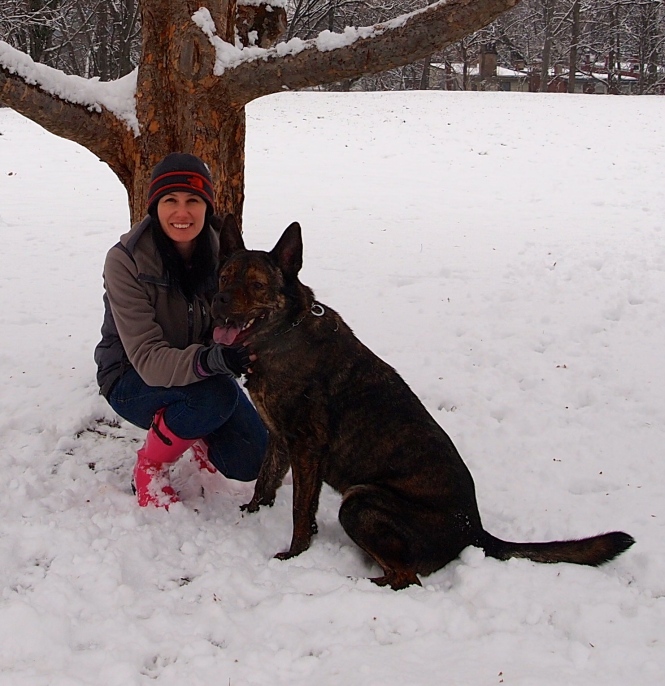 We drove home from visiting family Christmas Eve night, we burnt our Christmas lists then tucked the kids into bed.  After leaving Santa a snack and taking care of last-minute details, Ben and I dragged ourselves to bed.  The kids were up by 6:30 and ready to open presents.  Their big combined gift this year was a Wii.  I must admit it is fun to play, but I enjoy watching the kids play more.  I love watching them attempt Just Dance 4…the dance moves these kids have are out of control.  Ben’s parents arrived and joined us for lunch.  We had spaghetti, meatballs and salad.  Dessert was christmas cookies, pie and reindeer chow. 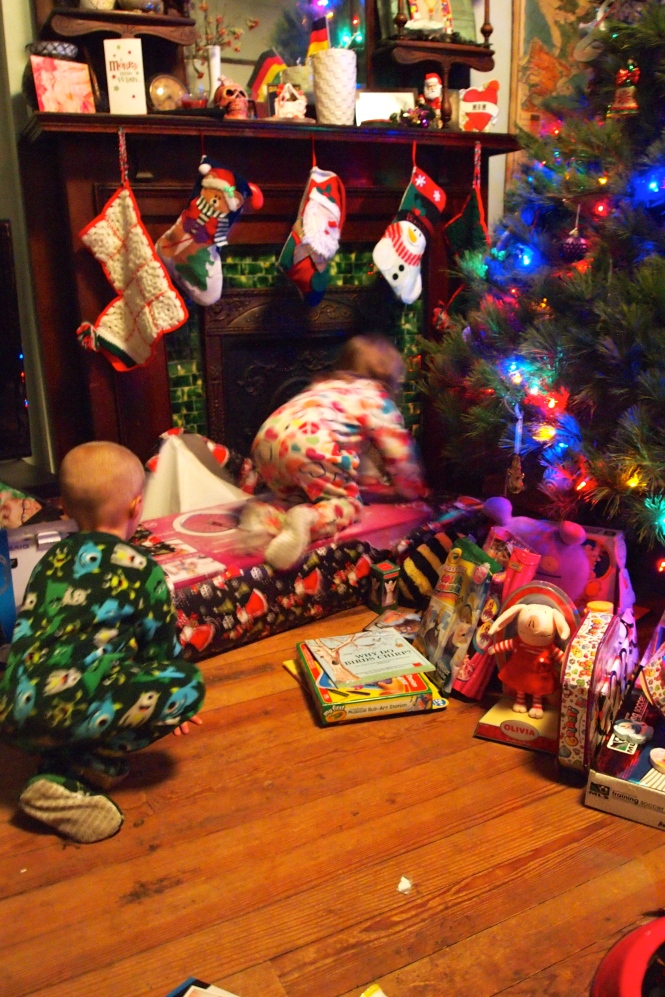 Vita’s new bike. Blackburn and Isabella both have fairly new bikes and it was time for Vita to have one of her own.  She was very excited. 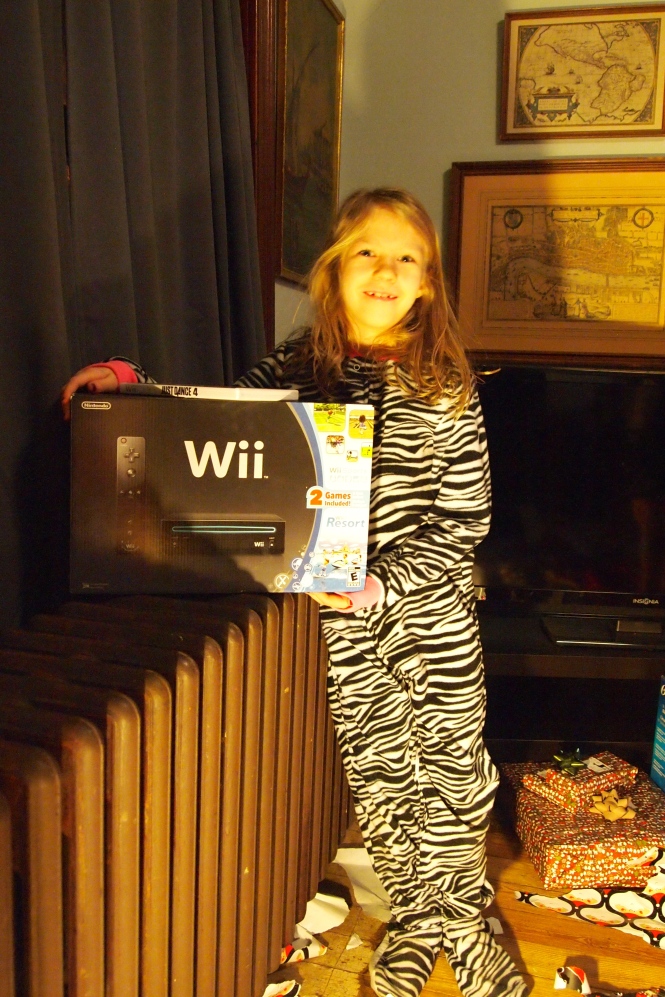 Santa received their lists and all three had Wii listed at the top, followed closely by a request that it be placed in their room. Santa granted the Wii but it is in the front room – not anyone’s bedroom. 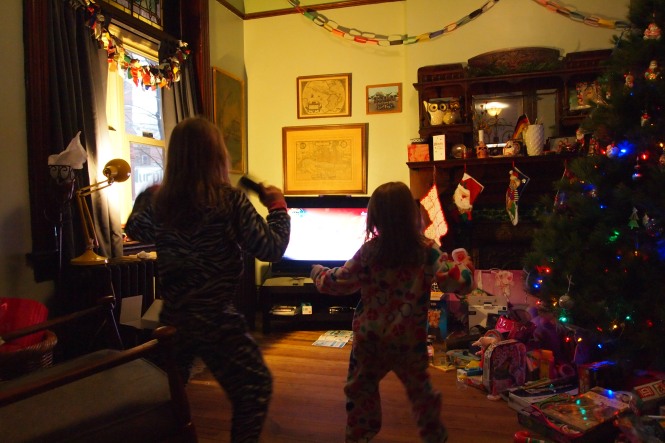 If you just gasped when you read the above-caption then you are familiar with the green room/front room/quiet room…the room without television, radio – the room that is calm and quiet and mainly mine…yep that’s where the Wii is now.  I will selfishly admit that the main reason I hesitated to get a Wii was because of placement.  Having a tv and game system in any of the kids’ rooms was an absolute no.  I did not want it in the dining room, Ben needs to sleep in the evenings before work so our bedroom was out of the question, which only left the green room.  I’m adjusting and I have plans to turn the unfinished attic part of the third floor into an art room/quiet room, in the future.

Decorating gluten-free christmas cookies and a candy house with grandma. 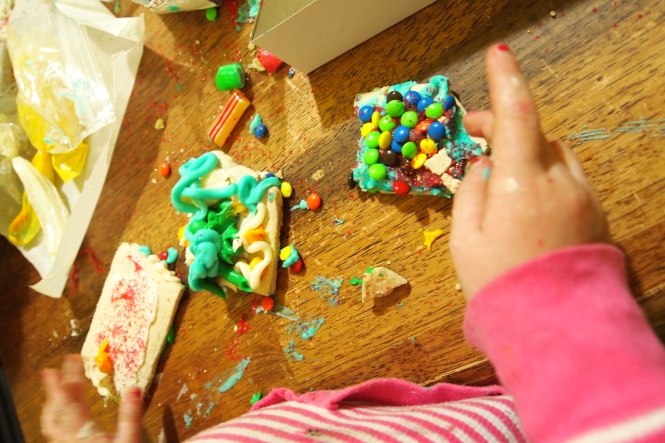 Vita’s finished masterpiece cookies.   Tomorrow I will show you some additions to my owl collection and show you my gift to Ben.  Also I have some snow pictures to share.  We finally got snow and I went a little camera crazy!

Christmas Eve was busy as we tried to fit in several family visits.  Below are some holiday pictures:

Christmas Eve at the Savage’s get together.  They have a Santa, Elves and the Grinch visits each year.  We had to leave before the Grinch came this year.  Vita was happy about this, she is not a fan of costumed characters. 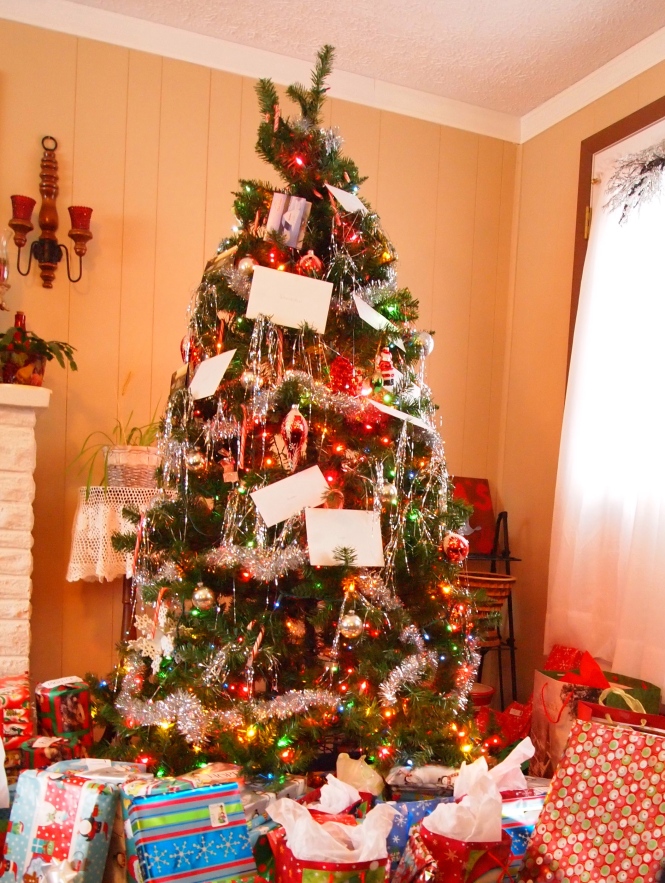 Christmas Eve at my grandparents.  It was nice to see family, some of which I only see at Christmas time each year.

We finished Christmas Eve night at the Lake.  Ben snapped this picture right after we parked.  It was so quiet and soothing.  We stood there for awhile despite the cold.

Great grandkids at the lake – traditional staircase picture. I remember the grandkids sitting on this step. I started sitting here with Ben fourteen years ago. It’s nice to now see the great grandkids take their turn. (Thankfully I never had to change into my pajamas before they took the picture!)

A Friday ritual. A single photo – no words – capturing a moment from the week. A simple, special, extraordinary moment. A moment I want to pause, savor and remember.- via soulemama 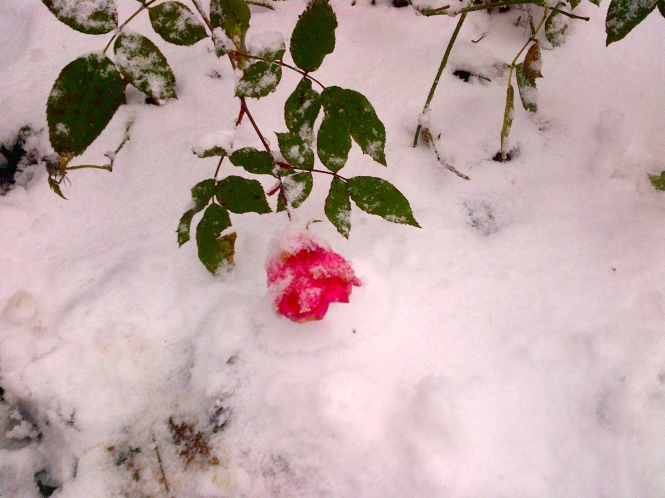 Wishing everyone Happy Holidays.  We’re leaving early tomorrow morning to travel back to see family, which means I am stepping away until Wednesday or Thursday.  Merry Christmas! ~The Savages 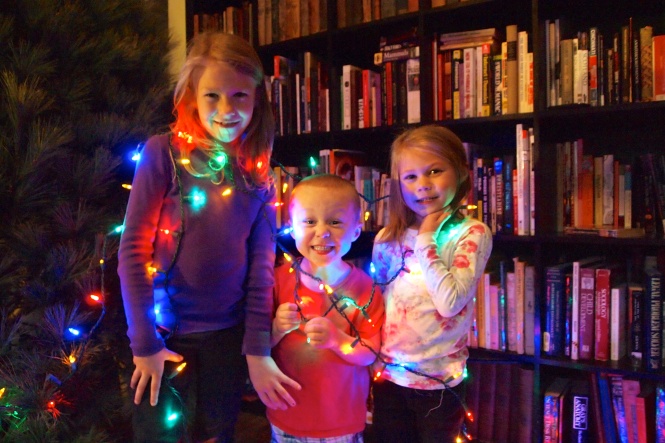 A Friday ritual. A single photo – no words – capturing a moment from the week. A simple, special, extraordinary moment. A moment I want to pause, savor and remember.- via soulemama

This weekend was eventful.  On Saturday morning the girls had a very early soccer game, which they won.  Then we headed to the nearest mall to start and finish our Christmas shopping all in one day.  After the mall we spent awhile at Ikea and then headed home to relax.  When we got home a package was waiting for me.  I received my place mat from Natasha (tashebe79@yahoo.com).  I had entered Karen’s giveaway a couple of weeks ago and was so excited to win. http://www.yellowladybird.com  The kids are taking turns passing the mat around at snack time. 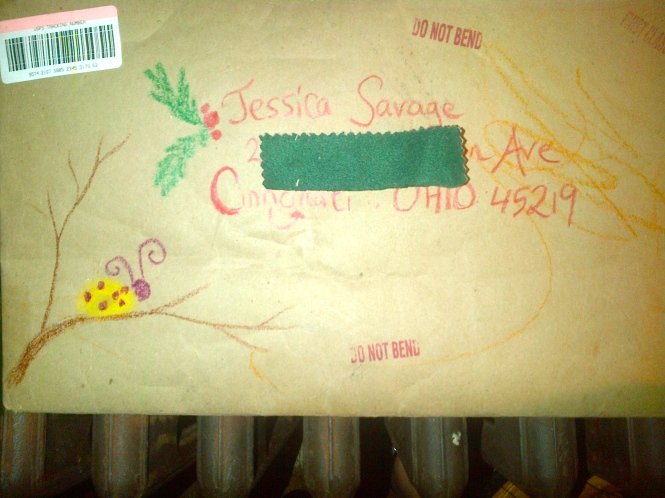 I love the envelope! 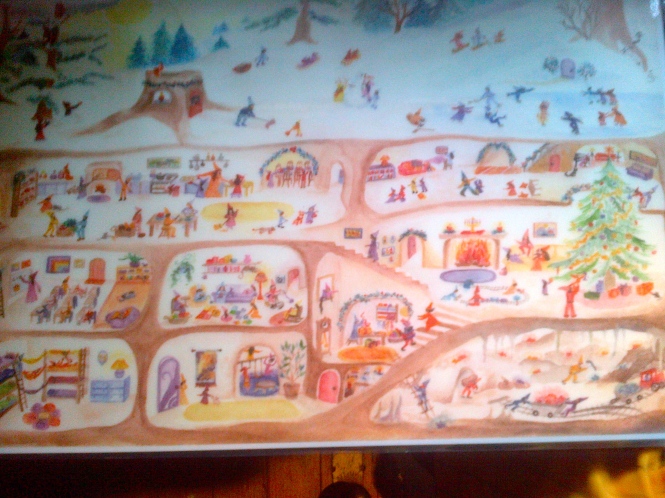 Each time we look at it we find new things.

Saturday evening Blackburn was running around with the girls and he slipped on the tile and fell.  His head/ear slammed into the bottom step of our staircase.  His ear immediately swelled up and turned purple.  After about five minutes he stopped crying and was acting his normal self, but the ear looked horrible.  Ben said he needed to go to the hospital so the blood could be drained and he would not end up with cauliflower ear.  A term Ben is very familiar with after years of wrestling.  He told me what he thought the hospital would do, which helped me prepare myself.  Five hours later, a sedated little boy and a very anxious mother, were released from Children’s Hospital.  The staff were amazing, they entertained and soothed him while explaining to me exactly what they were doing as I watched each step.  I was hesitant to sedate, but they told me in order to do the nerve block without him fighting, it would be best.  He never went completely out, just groggy.   It was so hard to see him cry and deal with the shots.  After the ear was numb, they made an incision along the top of the ear and the blood immediately poured out.  They stitched him up and gave him antibiotics.  He goes back on Thursday to have the stitches removed.  Fingers crossed the swelling goes down soon and the bruising disappears. 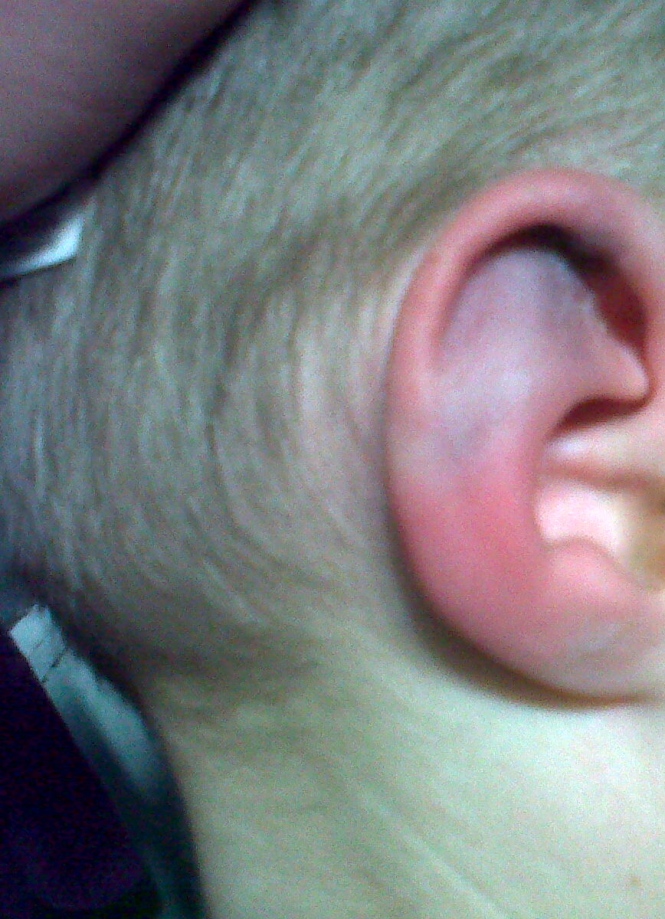 Right after he fell, the top part was a lot more swollen by the time we arrived at the hospital. 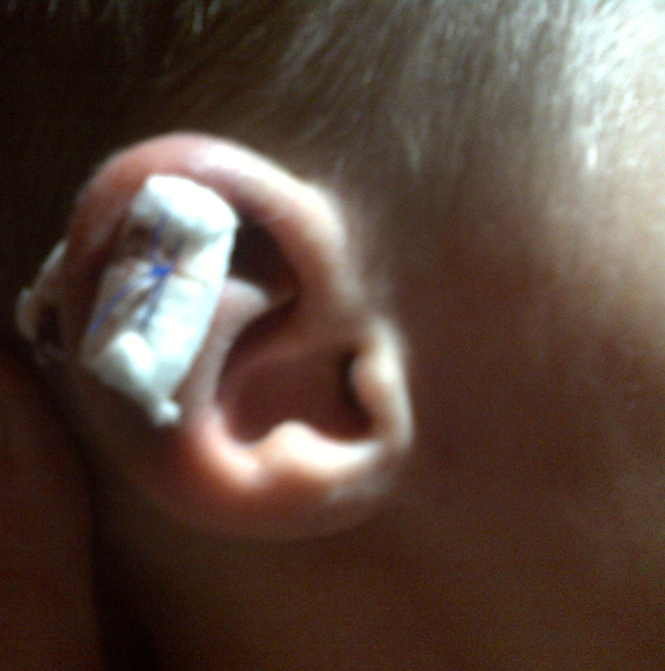 After – stitches in place.

On Sunday we just relaxed and  wrapped some presents for nieces and nephews. I am ready for snow any day now.  We are really hoping for a white Christmas.

No {this moment} today.  Instead I offer a moment of silence for the families, friends and victims of Connecticut.  No words or images can express something this tragic and unnecessary.

Vita attended an early morning birthday party for a school friend.  Ben took her while the rest of us slept in at home.  She had a lot of fun and Ben captured a couple of photos on his phone.

Saturday was raining so Ben worked inside on Blackburn’s ceiling.  It’s been almost a year since a section of his ceiling collapsed.  It was a horrible experience.  Ben was at work and I came downstairs to check on the kids and heard a dripping noise.  I walked in the room to find a bubble of paint holding a ton of water.  I was able to slide a couple of things out from the corner before it burst and water flooded everywhere.  We have box gutters and a piece of metal caused a blockage, the water went between the second and third floor and pooled in a corner of his room.  Because of the fear of mold, we ran dehumidifiers, threw out a ton of clothing, blankets and his dresser (all of which were under the ceiling when it collapsed) and washed everything down with bleach.  A couple of months ago  we felt comfortable putting up drywall squares since we were sure there wasn’t any mold.  We started collecting pallets from his work with the plan to cover the ceiling.  Saturday he decided to try out a corner and see how it looks.  I love it!  I know some will hate it , but I really like it.  Here is a before picture after the flooding and some new ones.  It is going to take us awhile to complete the room. 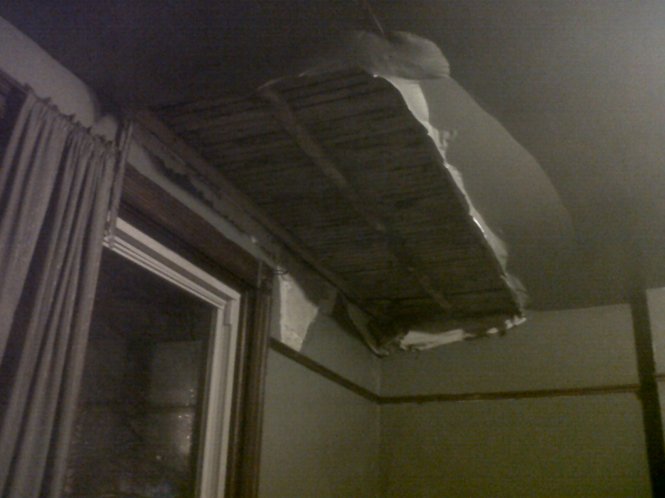 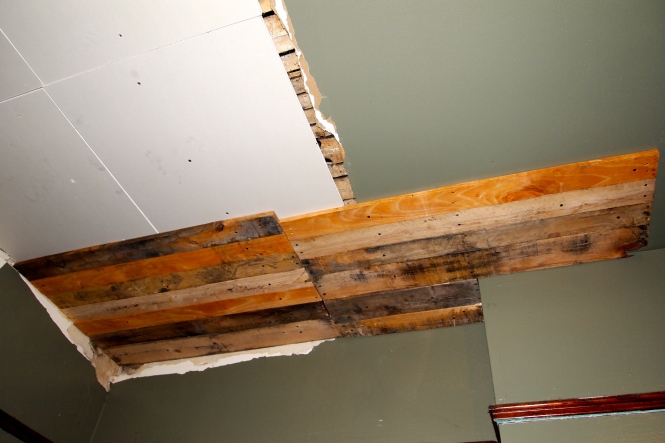 On Sunday since it was still raining, the kids and I worked some more on our scrap, fabric garlands and we traced their bodies for coloring. I also finished season 2 of Jericho on Netflix.  I really enjoyed this series and wish it would not have been cancelled.  I am told there are some comic books that pick up where the show left off. 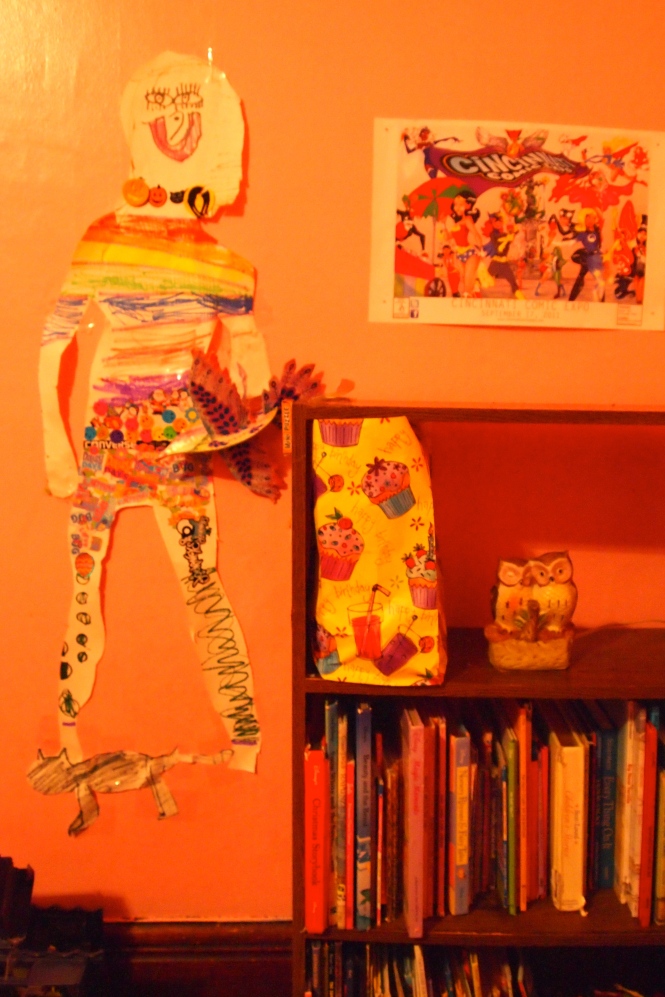 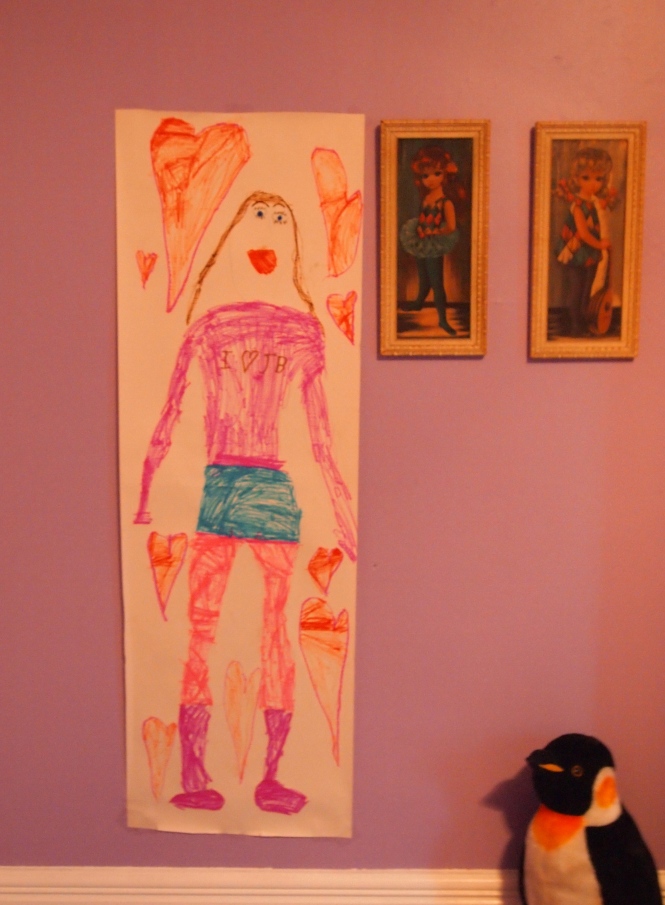 Yes, Isabella’s shirt says, “I Love JB” – She blushed as she told me Justin Bieber.

All in all, it was a relaxing, quiet weekend.